75 Words to Ace Your English Exam 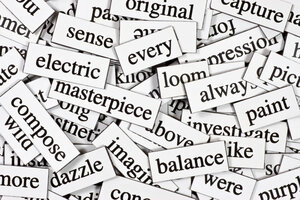 In a literary analysis, the markers are looking for knowledge and understanding of the text, but also for a well crafted, academic essay in response to the question.

One study technique that will instantly improve your results, is to learn and use the specific vocabulary that applies to the text. These words will definitely make you sound like a literary academic.

But it’s not enough just to throw around some big words. Remember, big words aren’t necessarily better words. It’s important to understand the meanings of these words (and learn how to spell them) so that you are able to use them appropriately and in context.

As part of your study routine, be sure to learn some key academic words.

Here’s a list of 75 words that will instantly help you sound more sophisticated and knowledgeable.

While you don’t have time to learn them all (and your essay would sound weird if you used them all anyway), try to pick out some key words for each of the key areas of focus and use them in your essay.

It is important to place a text in its context and consider how it reflects or challenges the values, attitudes and beliefs of the society in which it is set. For example, if it is a racist society, does the text reflect the same racist attitudes or go against them? These ideas can be easily and efficiently conveyed through the use of specific terms.

1. autocratic – ruled by one person with unchallenged power

6. entrenched – characterized by something that is firmly established and difficult to change

7. lucrative – having a large reward, monetary or otherwise

9. patriarchal – society that gives power and status to men

10. prejudiced – judging people by social acceptance rather than character

The aesthetic elements of a story include the way in which it is crafted and the emotional impact it has on the readers. Some key words here include:

1. allegory – a second story or message that can be inferred by the main narrative (eg exposing truth about 1950s America by depicting the Salem witch trials)

2. allusion – a reference to another text with which the audience would be familiar to explain the current situation (eg it was a David and Goliath situation).

4. irony – when what occurs is the opposite of what you would expect

5. linear narrative / stream of consciousness / reflection – styles of writing or structuring a text

6. metaphoric – if something is used to represent another (adjectival form of metaphor)

7. motif – an image or idea that runs throughout the text eg references to birds

8. symbol – using an object to imply or stand for an idea eg doves (peace) or ravens (death)

9. soliloquy – a long speech delivered by a character (internal monologue) often delivered to the audience without other characters hearing

10. synonymous – can be substituted for… (adjectival form of synonym)

The literary elements refer to the writing style and structure of the text. For example, a murder mystery uses fairly set literary devices, where a dystopian texts often utilises uncommon literary elements to create a sense of displacement and uncertainty.

1. anomaly – deviation from the normal or common order or form or rule

2. antecedent – a precursor, or preceding event for something

3. capricious – determined by chance or impulse rather than by necessity

4. catalyst – an agent that provokes or triggers change

5. conundrum – a difficult problem with no easy solution

6. defunct – no longer in existence or functioning

7. dichotomy – a division or contrast between two things that are presented as opposites or entirely different

8.disparity – a great difference between things

9. dystopian – a society that has been disturbed and overturned making it miserable and oppressive

10. equivocate – be deliberately ambiguous or unclear

13. fiasco – a complete failure or collapse

14. foster – to encourage the development of something

15. galvanize – to shock or excite someone into taking action

16. harbinger – something indicating the approach of something or someone

17. impetus – something that makes a process or activity happen or happen faster

Using specific words to describe characters is a great way to sound academic – and reduce your word count! They also help you explain the character’s purpose in the story as a literary trope.

1. antagonist – the villain or character presenting a challenge to the hero

2. brusque – rudely abrupt or blunt in speech or manner

4. foil – a character depicted as the opposite to another

7. Machiavellian – someone who believes the end justifies the means

8. misnomer – an incorrect or unsuitable name

10. narcissist – someone who is excessively self-centered

13. proponent – a person who advocates for something

14.protagonist – the hero or central character in the text

15. renegade – a person who betrays an organization, country, or set of principles

18.subversive – working to overthrow the existing government or social order

19.ubiquitous – being present everywhere at once

20. zealot – a person who is fanatical and uncompromising in pursuit of their religious, political, or other ideals

These words might also prove useful when discussing literary texts.

1. anomaly – deviation from the norm

2. debacle – a powerful failure; a fiasco

3. deter – to discourage someone from doing something by making them doubt or fear the consequences

4. discredit – to harm the reputation or respect for someone

5. exacerbate – to make a situation worse

6. inflame – to provoke or intensify strong feelings in someone

7. instil – to gradually but firmly establish an idea or attitude into a person’s mind

8. insidious – proceeding in a subtle way but with harmful effects

10. precipitate – to cause something to happen suddenly or unexpectedly

11. unrequited – not returned in kind

12. resurgence – an increase or revival after a period of limited activity

13. revitalize – to give something new life and vitality

14. ubiquitous – characterized by being everywhere; widespread

15. superfluous – unnecessary / beyond what is needed

Add a few of these words to your analysis to easily improve your vocabulary mark.

For more help for students watch our Youtube videos on a range of study tips.

5 Ways to Score Bonus Marks In Exams
Scroll to top